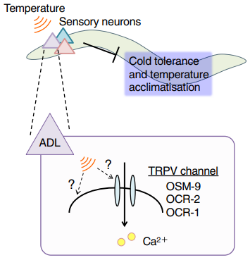 Researchers have discovered the molecular system described in this study provides useful information for studying the thermal sensation of other organisms. The target of OSM-9, published in "Nature", may provide new opportunities for research areas such as Neuroscience, Signal Pathway, and Cell Biology.

The main molecular mechanism of sensory signaling is conserved in the evolution from Caenorhabditis elegans to humans. OSM-9 and OCR-2 belong to the TRPV subfamily and contain multiple thermal sensors in mammals; TRPV4 is the closest homolog of OSM-9, involved in thermal and mechanical sensation. According to reports, the Caenorhabditis elegans osm-9 gene may play a role in the response pathway of olfactory stimulation and osmotic stimulation. osm-9 encodes a protein with ankyrin repeats and multiple predicted transmembrane domains. This domain has limited similarity with the Drosophila phototransduction channel transient receptor potential (TRP) and TRP-like (TRPL). The sequences of OSM-9 and other TRP-like genes revealed a previously unexpected diversity of mammalian and invertebrate genes in this family. In these neurons, the gene has a regulatory function, rather than playing a major role in sensory transduction.

Further detailed research results of scientists show that OSM-9 and OCR-2 TRPV channels cooperate to act as temperature receptors. Electrophysiological analysis of Xenopus oocytes showed that the OSM-9/OCR-2 TRPV channel can respond to temperature stimulation. Loss of OSM-9 or OCR-2 can cause abnormal thermal sensation in ADL sensory neurons, leading to interruption of domestication. These results indicate the TRPV channel in nematodes can be directly activated by warm stimuli, which is related to the temperature response at the animal level.

The abnormal thermal response of ADL in osm-9 and ocr-2 mutants was rescued by the expression of osm-9 and ocr-2 cDNA in ADL, respectively, indicating that OSM-9 and OCR-2 play a role in the temperature signal transduction of ADL.

Furthermore, another nematode heteromeric TRPV channel composed of OSM-9 and OCR-4 proved to be a receptor for nicotinamide (NAM, a form of vitamin B3 and an endogenous metabolite) in the heterologous Xenopus oocyte system. OSM-9/OCR-4 regulates NAM-induced vulvar one (uv1) cell death and OLQ neurons in nematodes.

The main molecular mechanism of sensory signaling is conserved in the evolution from Caenorhabditis elegans to humans. Therefore, the molecular system described in this study provides useful information for studying the thermal sensation of other organisms.

The work has been published in scientific reports.

Creative Biolabs is committed to providing our customers with high-quality products for modelorg antibody research. Currently, we provide a complete list of high-quality antibodies targeting OSM-9. Please browse our OSM-9 product catalog backed by our guarantee.