RNA m6A modification is the most common modification of mRNA in eukaryotes. In recent years, it has been involved in different biological processes and played a key regulatory role in species such as human, animal, plant and yeast. In these species, METTL3/IME4 is mainly in charge of catalyzing the m6A modification of RNA molecules on N6-methyladenine, and is one of the most important constituent proteins of the m6A methyltransferase complex. However, since no protein homologous to METTL3/IME4 has been found in filamentous fungi, whether m6A modification exists and plays a role in phytopathogenic fungi needs further research. The authors of this study identified MTA1 (generally thought to encode a key enzyme in DNA 6mA modification) homologous to the human METTL4 protein and subsequently demonstrated that this protein is involved in R. oryzae RNA m6A modification, but whether it is involved in DNA 6mA modification requires further investigation). 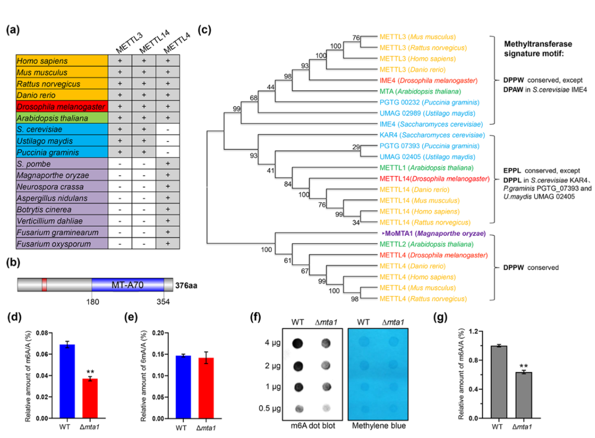 With MTA1 gene knockout, the total m6A modification of oryzae was significantly reduced, and the pathogenicity of the bacteria was seriously reduced. The reduced virulence analysis found that the function of the appressorium of the knockout body was affected, and the ability of infecting hyphae to expand was also inhibited. Knockout of appressorium formation resulted in significantly restricted glycogen and liposome utilization, blocked autophagy, and significantly reduced appressorium pressure. Since MTA1 plays a key role in the appressorium, the authors collected the appressorium material from wild-type and MTA1 knockout bodies for combined MeRIP-seq and RNAseq analysis. MeRIP seq analysis identified 595 mRNAs with reduced m6A methylation at 659 sites in the appressorium of the ∆mta1 strain compared with the wild-type strain. Among them, carbohydrate metabolism and lipid metabolism, and autophagy-related signaling pathways were enriched. Combined with RNAseq data, 114 m6A modifications were found to be negatively correlated with mRNA abundance, suggesting that m6A modifications may be involved in mRNA degradation. 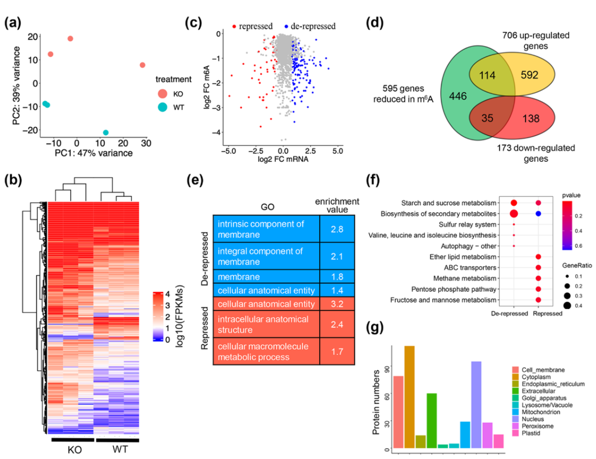 The work published in the well-known scientific journals "New Phytologist".

Creative Biolabs is committed to provide high-quality reagents and one-stop technical services for model organism researchers worldwide. We have a full line of high-quality antibodies targeting to rice m6A and Yeast m6A. Please feel free to contact us.