A Hot Target Discovered in Cellular Processes of Zebrafish 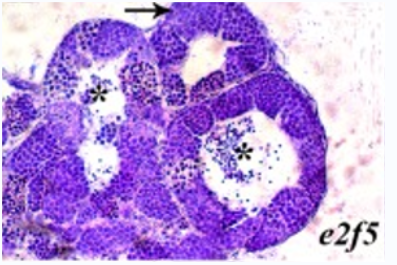 Researchers at the Ocean University of China are committed to using genetic, cellular and biochemical methods to study the mechanism of ciliogenesis using zebrafish and trichoplax as a model system.

E2F is a group of genes that encodes a family of transcription factors (TF) in higher eukaryotes. Three of them are activators: E2F1, 2, and E2F3a. Six others act as suppressors: E2F3b, E2F4-8. All of them are involved in the cell cycle regulation and synthesis of DNA in mammalian cells. E2Fs as TFs bind to the TTTCCCGC (or slight variations of this sequence) consensus binding site in the target promoter sequence. E2F5 is expressed in several structures, including Kupffer's vesicle; forerunner cell group; liver; nervous system; and pleuroperitoneal region. Orthologous to human E2F5 (E2F transcription factor 5). E2f transcription factor family members are essential for cell proliferation, differentiation, apoptosis as well as many other cellular processes. By contrast, the role of E2f5 during embryonic development is relatively less well investigated. E2f5-/- mice have a shortened lifespan and develop hydrocephalus due to excessive cerebrospinal fluid (CSF) production. Interestingly, mouse embryonic fibroblasts (MEFs) derived from both E2f4-/- and E2f5-/- mice display normal cell-cycle kinetics. All of these data suggest that the role of E2f4 and E2f5 during embryonic development is context-dependent, as opposed to these proteins functioning as general repressors in cell-cycle regulation.

MCCs are a specialized type of post-mitotic cells characterized by the differentiation of hundreds of motile cilia that can beat unidirectionally to drive fluid flow over their epithelial surface. The Notch signaling pathway is known to play a critical role during the determination of the MCC fate. Inhibition of Notch signaling leads to an expansion of MCC numbers at the expense of other cell types in various tissues where this phenomenon has been examined. For example, in the zebrafish pronephric duct, the Notch ligand Jag2b is expressed in developing MCCs. Interaction between Jag2b and Notch1a/Notch3 receptors, a process called lateral inhibition, orchestrates the segregation of the ‘salt-and-pepper’ pattern of MCCs and principal cells in the pronephros. Homologous recombination (HR) is an essential step during meiosis when homologous chromosomes pair and undergo reciprocal exchange of DNA during the first meiotic division. Currently, the role of E2f5 during spermatogenesis, especially in meiosis, has not been reported. The teams have generated loss-of-function alleles in zebrafish e2f5 and investigated the role of the gene during embryogenesis and adult development. The teams found that E2f5 is not only required for MCC formation but is also required cell-nonautonomously to orchestrate the differentiation of neighboring ion transporting principal cells by regulating the expression of jag2b in MCC precursors.

During cell-cycle regulation, E2F5 has been recognized as a transcriptional repressor that inhibits gene expression at G1 phase. In this study, we provide data to show that E2f5 also functions as a transcription activator. In particular, E2f5 activates the transcription of dmc1 to promote homologous recombination during meiosis. Our data, together with previous reports, suggest that E2f5 also functions as a transactivator to control the expression of genes required for centriole duplication and ciliogenesis during MCC differentiation.

In this study, the research teams have shown here that E2f5 binds directly to dmc1 promoter and that the downregulation of dmc1 expression is the major factor accounting for HR defects in e2f5 mutants. Although overexpression of Dmc1 increased male fertility in e2f5 mutants, we failed to recover mutant females, suggesting that other genes regulated by E2f5 also contribute to proper oocyte development.

Furthermore, the data also suggest a functional difference of foxj1a and foxj1b during multicilia formation. Foxj1b likely contributes to multiciliogenesis in MCCs, while Foxj1a is a general factor for motile cilia differentiation. In gmnc mutants, the expression of foxj1b is absent while foxj1a remains unchanged, which further confirms their functional diversity. Finally, principal cell markers, including trpm7, appear to be expressed normally in the e2f5 mutants. Together, these results suggest that both MCCs and principal cell precursors are specified in the mutants, while multiciliation and lateral inhibition is interrupted due to the loss of E2f5, and this finally results in the formation of single motile cilia in both cell types.

These observations show that besides its function as a transcription repressor during cell division, E2f5 also functions as a transcription activator both in spermatogenesis and multiciliogenesis. This information will help us to further appreciate the genetic complexity in the function of the E2f factors during embryonic and post-embryonic development as well as in adult physiology.

The work was published in the well-known scientific journal "PLOS Genetics."

Creative Biolabs has extensive experience in generating high-quality antibodies to fit your research and production needs. Our custom antibody services including design and synthesis peptide, antibody purification. Please visit our website to find a selection of our most popular E2f5 products.